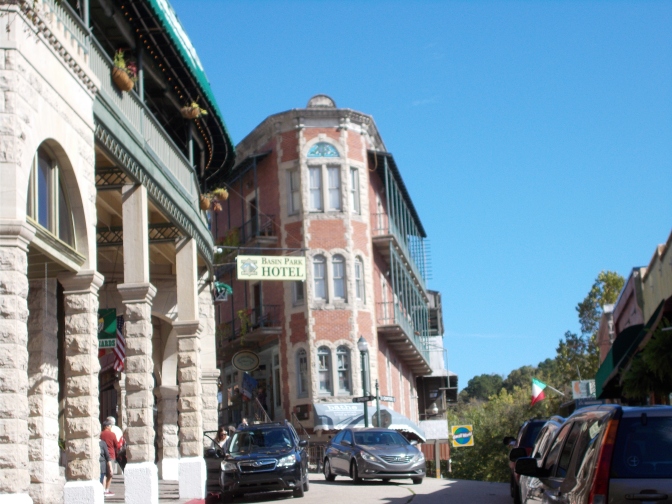 WARNING:  Do not go to Eureka Springs Arkansas on the weekend if you do not like driving!  Lucky for me, one of Tim’s favorite things to do is drive on twisty, turny, crazy steep roads as fast as he can get away with.  Arkansas in October is a must do for drivers who love fall color and great roads so Eureka Springs is full of people on the weekends looking for craft fairs and fun fall drives.  The weekend we were there was no exception.

Whoever laid out the town of Eureka Springs may have been drinking too much “Fountain of Youth” water because it is not car friendly.  They do, fortunately, have a park and ride tram system that will take you down the main roads allowing you to relax while someone else navigates the twisting, narrow roadways.  If you are planning on spending the day checking out the neat shops, historic springs, and maybe catching a ghost tour or riding on the dinner train; parking and riding the tram may be your best option.

Eureka Springs is interesting in that is was established as a resort for the wealthy to take “treatments” for medical issues in spas supplied by any one of the 42 original springs the town is founded around.  Ozarka bottled spring water was founded from these springs.  The American Indians of the area had known about the healing powers of the spring water even going so far as to carve out a basin in the limestone for the water to collect.  For a look into the history of the city and its origins, I highly recommend the Historic Museum located on South Main (Hwy 23) on the south end of town.  There is a small fee of $5 per person, but if you’re interested in finding out more about the town it’s worth the cost.  After the tour they provided us with a helpful map of the town with markers for all the current springs and of course, businesses along the way to them.

Due to the popularity of the town in the late 1800’s, the railroad built a spur line to the town which is how Rogers, Bentonville, and Springdale also received shipments of supplies to help build those towns into what they are today.  Buggies awaited the train passengers, whisking them up the steep streets to numerous hotels and spas helping the small town grow and prosper.  Judging by the size and variety of the Victorian era houses that march up the hills of the city, money came quickly to Eureka Springs throughout the late 1800’s and early 1900’s.

The Eureka Springs and North Arkansas Railway train depot is worth a look even without the ride.  They are closed on Sunday, which was when we were there, but looking through the windows you can see the attraction has tried to maintain the original furniture and accouchements that would have made the station unique to the time period.  That train line continues to take on passengers today as a lunch and dinner attraction covering 4 ½ miles in 2 hours from May through October.  Excursion trains with no meal run from April to October.  Buy tickets ahead at http://www.ensarailway.com.

Now a tourist destination for many reasons from spas, to shopping, to ghost hunting, Eureka Springs is eclectic, busy and beautiful.  With our combined interest in history and antiques, Tim and I spent more time looking at Victorian houses and in the antique and junk shops than anything else.  Driving around early on Sunday morning was much easier than the previous evening and gave us a chance to really see what was what.  We had breakfast at Main St. Café, checked out the historic Carnegie Library right next to the Crescent Spring, and gaped at the architecture of the Crescent Hotel.   Some of the original structures are still standing from the towns founding including the St. Elizabeth Cathedral which survived the fires that swept through the town in earlier years.

After asking a local where to eat Saturday night, two contenders were Sparkys and The Rockin Pig Saloon.  Since we weren’t in the mood for BBQ, Sparkys won.  Though busy, the place was large enough that we were seated right away.  My spicy chicken enchiladas were delicious, though I did not care for their guacamole which had a lot of onions and not enough avocados.  Tim decided he did want BBQ and went with the pulled pork sandwich with fries.  After removing some of the copious amounts of sauce, the sandwich won final approval and the fries were perfect.  BBQ is a very subjective dish, to each his/her own.

Eureka Springs pretty much beds down in the winter months and not much happens after Christmas.  Even the Main St. Café closes some days and the residents rest up for the next tourist season which begins in late March and April.  We will go back next year to ride the dinner train, visit some of the springs when they are running high after our Ozarks spring rains, and maybe catch that Crescent Hotel Ghost Tour.  I may even grab the kids and head down there this Christmas to see the town lit up and look up at the Crescent Hotel when the leaves are off the trees, standing over the town like a sentinel marking time until the tourists return, bringing it back to life.